It’s pleasant to celebrate the third Šnekutis bar during the Kaziukas Fair—a spring festival held in Vilnius since the 17th century. At this time Vilnius old city warmly welcomes crowds of merchants, townsfolk, and guests. This year, on the centenary of the restoration of the state of Lithuania, the old capital has become one gigantic bazaar. 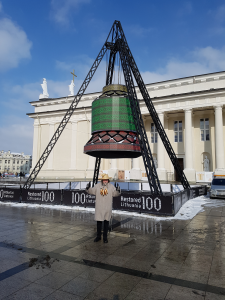 Valentas, owner of Šnekutis, has been out in the city since early morning—to greet the participants of the fair and invite guests to the birthday of the newest Šnekutis bar. He visited the estimable Joalda, Daujotas, Klausučiai, and Jovarai beer brewers, who supply this venerable drink to people and taverns. Valentas greeted everyone and asked about the trade during the current restriction of alcohol. He wished them well and invited them to stop by.

Making his way through Kaziukas Fair, Valentas had received a lot of attention, for it is fun for everyone to meet a genuine, lively, fun, and flamboyant person. His every step was met with photographers, TV cameras, and tourists. Everyone wanted a picture with him, arrayed in linen, with straw hat and a necklace of traditional Kaziukas ring-shaped rolls. Many photos from the Fair have been posted on Facebook. 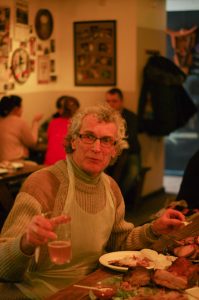 The official opening of the Kaziukas Fair did not lack spontaneous fun. At Lukiškės Square, Valentas met an extravagant honey cake vendor. When the country band Sutaras struck up a polka, Valentas without a second thought invited her to the stage for a dance. To general surprise and delight, other pairs joined with the improvising dancers.

On Saturday afternoon, the Fair fun moved to St. Nicholas Street 15. The band Ratilai, Albinas and Ko played. The mistress of the Šnekutis bar served four kinds of meat bearing symbolic meaning. One marinade turned pork into bright and juicy meat; the other two—into darker and denser meat, resembling charcoal and blood. The fourth marinade was spicier and served with mustard. Meat with delicious sauces, cabbage salad, and potatoes cooked with the skin drew all to the Lithuanian table. Everyone had a chance to taste the four flavorful meats, symbolizing the four years of the Šnekutis bar on St. Nicholas Street.